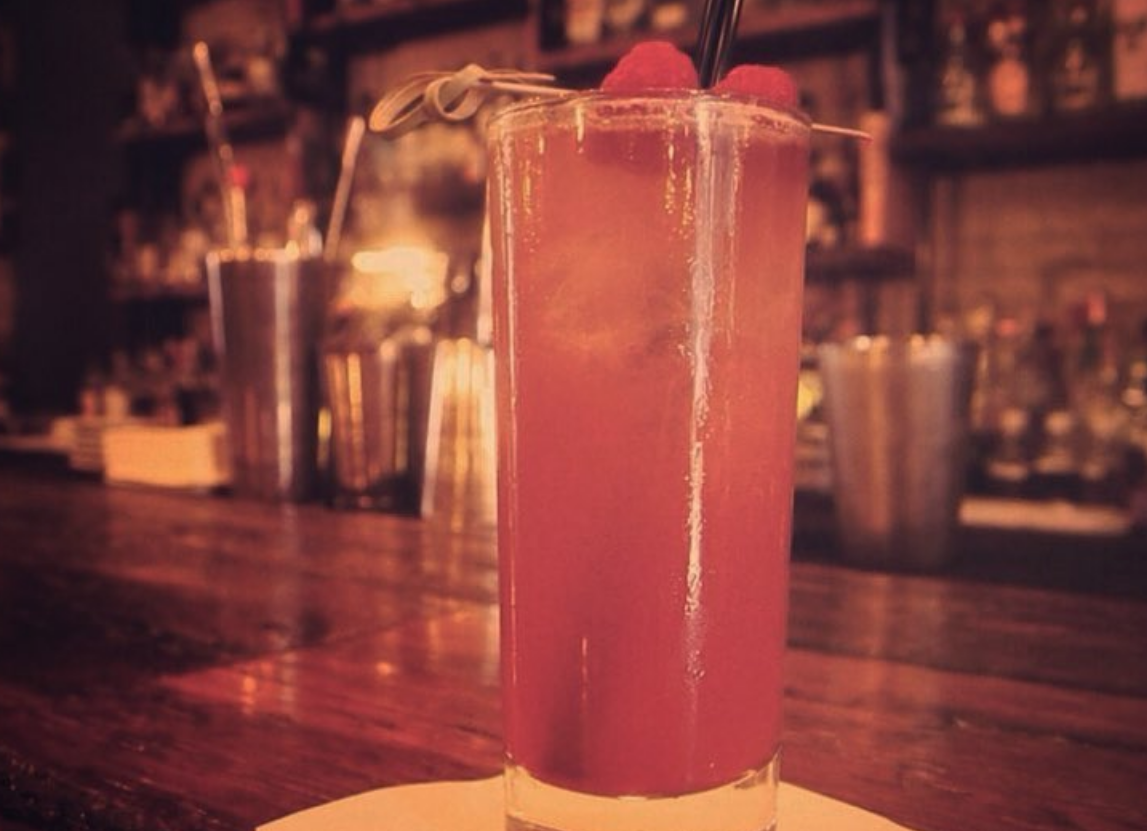 A Sadly Forgotten Cocktail: The Roffignac

As unknown and scarcely listed as it is, chances are you probably never heard – not to mention had a taste of – the Roffignac until now. No worries though, things are about to change!

The Roffignac is a classic New Orleans cocktail made out of Cognac, Raspberry Shrub and Club Soda that got its fame in Louisiana in the 19th and 20th centuries and has sadly been forgotten since then.

I was personally introduced to this cocktail by my dear friend and neighbor Del Pedro at his bar Tooker Alley (Brooklyn, NY), as it first hit their Spring menu in 2013. It quickly became my go to drink for sunny afternoons and I have been highly encouraging anybody I know to discover it since then!

This cocktail, said to be named after Count Louis Philippe Joseph de Roffignac, mayor of New Orlean from 1820 – 1828, became a signature drink of the city and was served at many bars and restaurants, including Mannessier’s Confectionary (closed in 1914) and Maylie’s restaurant (closed in 1986).

The drink has also been recorded in Cocktail books such as Stanley Clisby Arthur’s 1937 Famous New Orleans Drinks and How to Mix ’Em, as well as promoted in local newspapers ads (such as 1874’s ad for Harrison’s below).

The many stories behind the Roffignac’s name

When I was first introduced to this cocktail, it was presented to me as an hommage to the City’s mayor Count Louis Philippe Joseph de Roffignac. While I figured it was just an original creation from a local bartender, I wanted to know more about that guy and started my researches… Little did I know that there were quite some interesting stories behind this cocktail.

It has long been said that Roffignac concocted the drink himself before he became mayor and that it was his absolute drink of choice.  The book Beverages De Luxe (1911) repeats the assertion that Roffignac had come up with the drink and says: “Its inventor was once the mayor of the Mayor of New Orleans during the ancient regime, and tradition tells us that Monsieur le Maire was the most popular official the Crescent city ever had. On afternoons the mayor’s office was always thronged with visitors desirous of both paying their respects to the Knightly Rofignac and also enjoying one or two of his delicious ‘Rofignacs'”

Story 2: The recipe was created to celebrate a pseudo “act of heroism” from the mayor

A second – although not as glorious – story still emphasized the role of Mayor Roffignac in the inception of this drink, as the historian Gayarre reported in the American Magazine (see original story here).

As two groups of boys were engaged in a firecracker war, projectiles flying from one side of the street to the other and people gathering around it,  Mayor Roffignac arrived with 50 gendarmes carrying bayonets, determined to take action.

“Gentlemen, what means this disorderly conduct?” he shouted, according to Gayarre. “What means this outrageous riot? Is it rebellion against the laws of the state, or is it my life that you seek? If it is my life, take it!” The mayor then ripped open his shirt “with a heroic sweep of his hand.”

(Un)expectedly, the dramatic gesture did not have the desired effect and children pelted him in the bare chest with their firecrackers. The mayor screamed and jumped, and the crowd was much amused.

“There was a roar of laughter which put the citizens in the best of humor,” Gayarre wrote. “They shouted: ‘Hurrah for Rouffignac, who has sacrificed himself and died for his country! Rouffignac forever!’

“In commemoration of that mighty event, a man of genius in his profession, a barkeeper, invented a drink which he called a ‘Rouffignac,’ and which has remained to this day as popular as the name of that worthy magistrate”.

Story 3: The Roffignac simply bears its name from the Cognac Brand it was made with.

This third and last story (at leas that I know of) is probably the least original yet most likely of all! Just like the Sazerac bears the name of its spirit, it is very likely that the Roffignac got its name from the Cognac Brand Roffignac, maybe distributed at the time in New Orleans!

No matter what the Roffignac owes its name to, I can only feel blessed that I got to discover it a few years ago, and keep sipping on it since then !

While the recipe noted in Stanley Clisby Arthur’s book calls for Whiskey, it also notes that the Cocktail originally featured Cognac. Unfortunately, European’s Phylloxera led to such a strong inflation for Cognac that many cocktails switched for Whiskey and were then recorded as such. As per my love for both Cognac and for this Cocktail, I will only focus on the one, true original recipe:

For the shrub: Combine 1 cup of red wine vinegar and 1.5 quarts of freshly picked raspberries in a bowl and refrigerate for 3 days. Mash raspberries and strain the liquid through a fine-mesh sieve lined with cheesecloth. For each cup of juice, add 1/2 pound of sugar and combine in a saucepan. Bring to a boil and simmer until sugar dissolves.

Let me know what you think and please, help me spread the word if you like it !!!